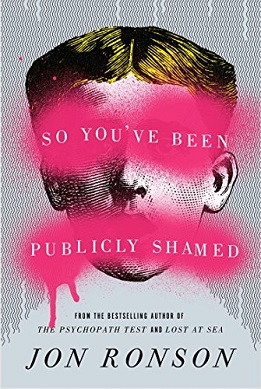 I am locked into Jon Ronson. He doesn’t know it obviously but I have loved his bibliography so much that I am contractually obliged to read anything he releases now. The subject matter of his latest book is so fascinating however that the fact that it is a Ronson book is almost incidental.

As a society we bloody love a public shaming these days. Any opportunity to rip someone to shreds on Twitter is gleefully accepted by the pitchfork wielding mob. As Ronson himself states, these shamings started off as a way to reclaim power from the more financially dominant areas of society but now the online shaming community has become more like the Wild West with seemingly innocuous targets destroyed on an almost weekly basis. You may not be immediately familiar with the names of Justine Sacco or Jonah Lehrer, but you will have heard their stories. Whether it be a poorly worded joke on Twitter or the wearing of a supposed misogynistic shirt at a press conference, the baying online shamers are legion and terrifying.

Ronson delves into the murky world of online shaming in an attempt to humanise those that have been caught up in the malevolent web of the internet’s wrath. The stories themselves are fascinating and delivered in the authors usual dry, comedic style but it is clear that Ronson genuinely does despair at the treatment that some of his subjects have received. This is perhaps Ronson’s most personal work as he seems to question his own motivations and biases more and more as the book goes on. This makes for a surprisingly philosophical and enlightening read.

Jon Ronson is one of the best investigative journalists working today because he has the uncanny ability of capturing the zeitgeist and laying it bear for all to see. Everyone reading this will probably have participated in some kind of public shaming, you might not know it until reading Ronson’s book, but this should be a sobering read for many people who struggle to align their online persona with their real world morals and beliefs.