Every QOTSA album ranked from worst to best… 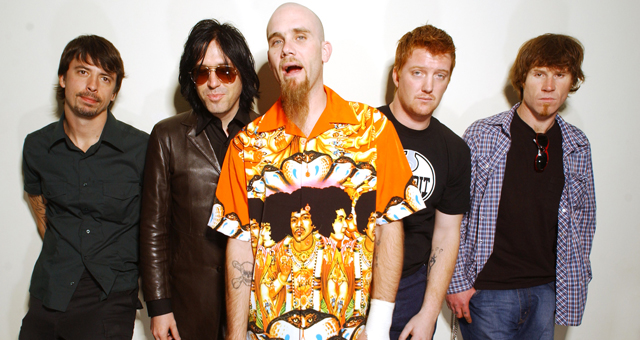 Josh Homme has loomed large over the rock ‘n’ roll landscape for two decades now, influencing everyone from Alex Turner and the Arctic Monkeys to Royal Blood and beyond. Along with Jack White, nobody has done more for pure, honest-to-goodness guitar music in the last twenty years than Josh Homme and his band. That being said, a QOTSA album can often be a patchy affair. Homme has never been afraid to experiment but it is when he returns to his desert rock roots that his music often becomes samey and uninspired. When he gets it right however, there is simply no more electrifying band in rock ‘n’ roll today. Let us begin…

What They Said: ‘There isn’t a single song here that you’ll remember, or want to return to, two summers hence.’ – Entertainment Weekly

Beloved by some, ignored by others, Era Vulgaris is an album of great songs and totally forgettable filler. While tracks like ‘Make it wit Chu’ and ‘3s & 7s’ have become staples of the bands live set, there are too many songs in the vein of ‘Battery Acid’ or ‘River in the Road’, both of which I must have listened to 50 times and I still couldn’t hum the melody with a gun to my head.

This album has been praised for its move away from the mainstream but that in and of itself is pretty meaningless unless the songs hold up. Too often on Era Vulgaris, the music doesn’t live up to the concept.

What They Said: ‘I remember thinking ‘no-one’s playing this trance rock music that you can dance to’… I thought I could try to do this thing that hadn’t really been done, and then I found out it had kind of been done but not very much’ – Josh Homme

Queens debut album finds leader Josh Homme still crawling through the hazy sludge of his previous band Kyuss. It is telling that the three best songs on the album are the ones that are furthest away from the stoner rock legacy Homme left behind. Opener ‘Regular John’ is a brilliant statement of intent and is by far the best song on the album. It is also the only song here that would fit comfortably on any other QOTSA album. This is followed by the chugging ‘Avon’ built around the kind of filthy riff that Homme would make his trademark on later records. Album closer ‘I Was A Teenage Hand Model’ is as close to a ballad as this debut effort gets and is catchy and memorable as well as being a whole lot of fun.

The rest of the album is hard to digest in one go. Tracks like ‘Mexicola’ with its fearsome bass line and the stop-start rhythm of ‘How to Handle Rope’ would sound fantastic if you were sat in a bar in the desert drinking whiskey but lumped together they all kind of merge into one long jam session which is always what stopped me from connecting with Kyuss in any meaningful way.

What They Said: ‘It’ll be of concern to Queens purists that Villains pulls from sounds that expired a decade ago and beyond’ – Under the Radar

I really, really want to love Villains but I just don’t. The first three tracks are fantastic. ‘Feet Don’t Fail Me’ is a wonderful example of hard rock meeting funk to create something inspiring that you can also dance to (I still can’t dance to it obviously but normal people can I imagine), ‘The Way You Used To Do’ is similarly memorable and insistent and ‘Domesticated Animals’ builds from a furious opening riff into a psychedelic stomp worthy of anything from Rated R but after that it’s all a bit… meh. At only 9 songs you would expect a little more of a Queens of the Stone Age record.

What They Said: ‘It would have been easy to make Songs for the Deaf 2, which is basically all I heard in my own head. But I can’t do that. You’ve got to shake all that shit away’ – Josh Homme

QOTSA were a troubled band during the making of their fourth album Lullabies to Paralyze. Bassist and some time songwriter Nick Oliveri had been fired following accusations of domestic abuse and on-off vocalist Mark Lanegan was off on tour with his own band. Instead of succumbing to this myriad of pressures however, Homme and his band harnessed it to produce a messy but compelling sequel to Songs for the Deaf.

‘Burn the Witch’ builds from one of those simple Homme riffs into something monstrous, ‘In My Head’ is the most underrated QOTSA single and ‘Little Sister’ is quite simply one of the best tracks that Homme has ever written. There are still too many forgettable moments on Lullabies… but when it’s good, it’s really good.

Key Track: The Vampyre of Time and Memory

What They Said: ‘I had to ask them ‘If you want to make a record with me right now, in the state I’m in, come into the fog. It’s the only chance you got.’ It brought us much closer, because you never really know someone till everything goes wrong’ – Josh Homme

Josh Homme had already established himself as a rock music legend by 2013 but it had been six long years since the disappointing Era Vulgaris and there was a feeling his star could be on the wane. Like Clockwork was a make or break record for many ways for QOTSA. Homme and his band rose to the pressure like a cactus reaching for the hot desert sun.

…Like Clockwork is perhaps the most consistent and focused QOTSA album since Rated R. From the crunch of ‘I Sat By The Ocean’ to the demented shanty of ‘Fairweather Friends’, from the haunting ballad ‘The Vampyre of Time and Memory’ to the stomping ‘If I Had A Tail’, Like Clockwork delivers across 46 glorious minutes to produce something truly special. A fantastic record.

Key Track: No One Knows

What They Said: ‘We’re still doin’ the same thing we always did, which is play music that we wanna hear but we can’t buy it in the stores so we have to make it. We’re not trying to cater to anybody…’ – Former QOTSA bassist Nick Oliveri

How do you follow one of the best albums ever written? Well, you write some of your best songs and hit the big time obviously. Songs for the Deaf is the song that announced QOTSA on a global level and it is easy to see why. ‘No One Knows’ is sixteen years old in August and yet it still sounds as fresh as ever.

The bands third album sees a group of musicians firing on all cylinders and it is also the best QOTSA line up, being the only record to prominently feature Mark Lanegan, Nick Oliveri and Dave freakin’ Grohl. This gives Songs for the Deaf a celebratory feel with Oliveri, Homme and Lanegan sharing lead vocal duties but still managing to sound cohesive, like a unit.

Songs for the Deaf is an album that rocks and hums from start to finish and it is also their most accessible work. Put simply, it is essential listening for anyone who purports to enjoy rock and/or roll.

It is difficult to think of another example of a band evolving so much in the space of one album than Queens of the Stone Age did with Rated R. Even Radiohead signposted their journey from being another middling alternative band on their debut Pablo Honey to the game changing classic OK Computer with the half-way house that was second album The Bends.

With Rated R, the band who released their sludgy self-titled debut album is well and truly gone. In their place is a new psychedelic sound, bursting with ideas and strolling confidently through rock music with a drug induced, complete lack of self-consciousness. It is impossible to pick out highlights from a record that is almost perfect but ‘Auto Pilot’ and ‘Better Living Through Chemistry’ are two of rock music’s most underrated jams. The singles are perfect, ‘Feel Good Hit of the Summer’ as the demented call to arms, ‘The Lost Art of Keeping A Secret’ is the three-minute pop single that would become archetypal on future QOTSA albums and ‘Monster in my Parasol’ is as wonderfully demented as the title suggests.

Rated R is utterly unique, totally timeless and fantastically furious all at once. Josh Homme’s chugging riffs, Nick Oliveri’s thundering bass and Mark Lanegan’s haunting vocals combine to produce something that they would never capture again. Magic, bottled up and sold in 11 songs. There is an elusive yet valuable sweet spot shared by readers of Kerrang, NME and Q magazine. Rated R finds it and digs its heels in.

And then… it’s over. QOTSA gave us something good to die for. Makes it beautiful to live. Peace!