‘There came a time when you realised that moving on was pointless. That you took yourself with you wherever you went…’ 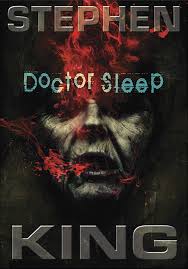 I have never written about books before because to be perfectly honest, I don’t think I know enough about literature to confidently be able to say anything interesting about it. If there is one author I do know about however, it is horror maestro Stephen King. I have read 29 of Kings novels, some of them more than once, and I have loved pretty much every single one.

Ironically one book of his that I didn’t massively get on with was The Shining. I consider Stanley Kubrick’s adaptation to be possibly the greatest horror film ever made so the book it was based on was always going to struggle to grab me in quite the same way. It was with some trepidation then that I sat down to read Doctor Sleep.

Doctor Sleep is a direct sequel to The Shining. Obviously the first instinct upon hearing that King was revisiting one of his most famous works was ‘cash in’. Upon further inspection however it becomes clear that money could not have been the motivating factor in this decision, indeed two of King’s most recent novels before Doctor Sleep have both been adapted for television and he must have made a fortune from other adaptations as well as book sales.

The Shining was written when King was in the throes of alcoholism and that is the subtext that was supposed to run through the work.  One of the reasons King was so upset with Kubrick’s big screen interpretation was that the master director played down that subtext. Doctor Sleep is similarly auto biographical as it finds Danny Torrance going through a recovery period from alcohol abuse. Danny you will remember was the son of the maniacal Jack Torrance in the original Shining novel and he is the central protagonist here alongside Abra, a young girl who also has the ability to shine.

One thing that becomes clear early on in Doctor Sleep is that King stills knows how to shock. Two sequences (both involving child abuse) were so gruelling that they genuinely upset me and I found it difficult to shake them even days after reading. As always though, Kings work is not just about shock value alone. There is a heart beating alongside the evil, and a human story waiting to be told.

Doctor Sleep is at times predictable, but always interesting, and the characters from The Shining are used sparingly and effectively. There is enough here to appeal to long time fans of both King and The Shining but Doctor Sleep is also a success in its right.

Whilst it will never be the cultural touchstone that was The Shining, Doctor Sleep is still a valid and worthy sequel.