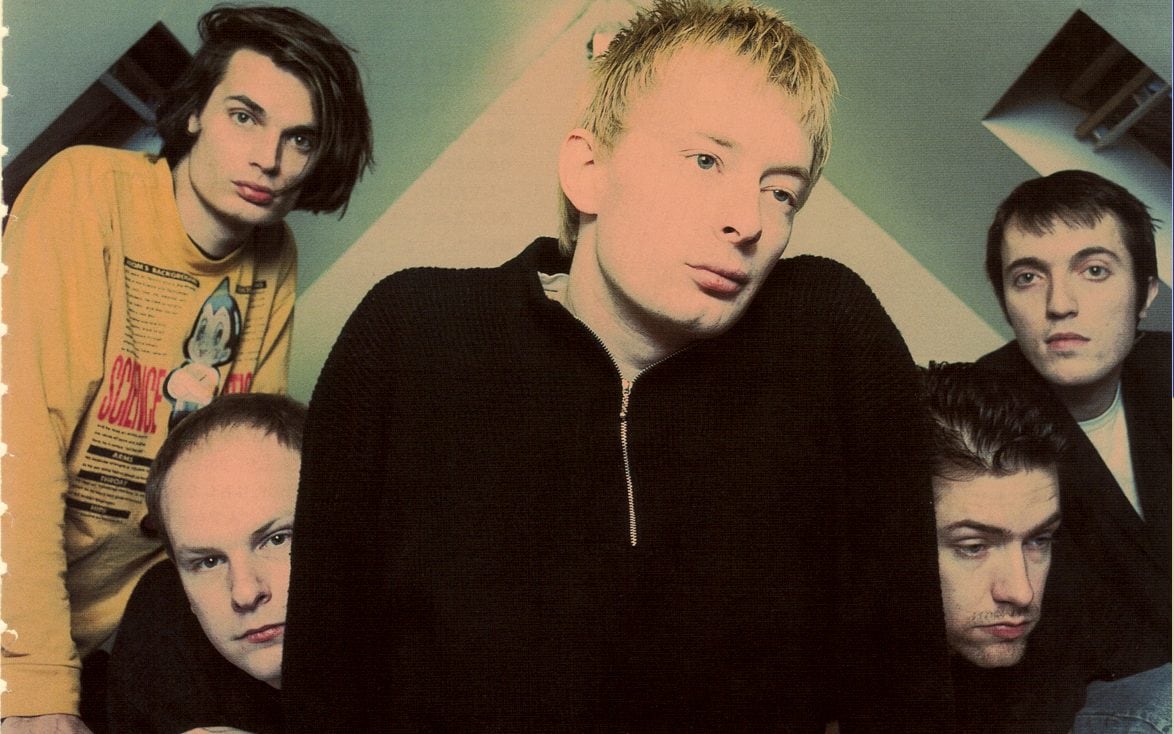 Radiohead are a band defined by their refusal to compromise for the sake of commercial gain. Staunchly left wing, and outspoken critics of the Iraq war and the Bush administration, Radiohead on paper are the perfect fit for a ‘band of the people’. Due to their perceived middle class background and gloomy music however, they have instead been characterized as having an audience made up of Guardian readers. A difficult and arty band that produce miserable, plodding music at odds with the anthemic, sing along choruses employed by the likes of Oasis and Kasabian.

In reality, this is a short sighted and quite frankly, incorrect view of one of the best ever British bands. As well as redefining guitar music at least twice, Radiohead have run the gamut of human emotion from hope to despair and back again. As their albums are so disparate and eclectic, Radiohead are a particularly difficult band to rank. Here goes…

What They Said: ‘Almost every tune is like a collage, with bits we pre-recorded and flying them at each other. It was like editing a film or something, it was quite interesting.’ – Thom Yorke

King of Limbs is not only Radiohead’s worst album, it is also one of the biggest musical disappointments of the last decade. Coming a full 4 years after the masterpiece that was In Rainbows, The King of Limbswas massively anticipated despite being released with little fanfare in 2011.

What followed was 8 mostly forgettable songs, that don’t even live up to the tracks that were left over from In Rainbows (some of which are brilliant). Radiohead are a band that evoke feeling and have the unique ability to make your hair stand on end. Aside from the ethereal ‘Lotus Flower’ however, Radiohead’s 8th and most recent effort plays like a band resting on their laurels.

What They Said: ‘I didn’t like it…’ – Johnny Greenwood

In researching this article I listened to the entire Radiohead back catalogue over the space of a week. Despite spending every morning sobbing in the shower, this was mostly a captivating and enjoyable experience. One thing that did stand out however, is just how average and pedestrian the Oxford bands’ debut record is. Apart from the genius of ‘Creep’ and the lovelorn ‘Thinking About You’, there is little else worth bothering with here.

Even the most dedicated Radiohead fan would struggle to hum the melody to ‘Ripchord’, ‘Vegetable’ or ‘Prove Yourself’ on demand and I challenge anyone to get through the cringe inducing lyrics of ‘Anyone Can Play Guitar’ without wincing.

‘Creep’ is one of the best songs ever written though, of that there is no doubt. It is also the song that propelled Radiohead into the spotlight and allowed them the breathing space they needed to produce the divine follow up The Bends.

Key Track: Packt Like Sardines in a Crushd Tin Box

What They Said: ‘I really like it . We always say, “[Pulk/Pull] Revolving Doors” seems to be like a litmus test. Some people are like, “Aw, no, fuck that.’ – Thom Yorke

‘Amnesiac’ was recorded as part of the same sessions of Kid A(released a year earlier) and this has seen the album suffer somewhat in comparison. Had Radiohead recorded this album independently, songs such as ‘You and Whose Army?’, ‘Knives Out’ and ‘Packt Like Sardines in a Crushd Tin Box’ would receive the plaudits they deserve.

‘Pyramid Song’ is possibly Radiohead’s most bleak and dreary single and was probably the final nail in the coffin for a lot of fans of their earlier, more guitar driven sound. Indeed Amnesiac is less urgent in general than the albums that preceded it but has enough killer tracks to ensure it a worthy addition to the bands back catalogue.

Key Track: Wolf at the Door

What They Said: ‘I think I had a meltdown when we put it together’ – Thom Yorke

Radiohead’s sixth album combined the guitar sound of the OK Computer era with the more electronica tinged albums Kid A and Amnesiac. There aren’t many bands that can sound this futuristic and exciting on their sixth album, which makes the finished product even more frustrating.

Hail to the Thief is simply too long but in ‘2+2=5’ and ‘There, There’ contains two of Radiohead’s best singles. The album length is not the problem but rather the number of songs. This makes Hail to the Thiefintimidating to listen to in one go but the best tracks are on par with anything on any Radiohead album.

What They Said: ‘The mythology around it (rock ‘n’ roll) has run its course and is stale and uncreative now, and it has been destroying the people who’ve been trying to make the music. I absolutely want no part in any suggestions that our decision to use some electronic instruments is some kind of lifestyle choice. It’s not.’

After being one of the most anticipated albums ever, Kid A challenged and confounded Radiohead fans with its startling change of direction. There is barely a guitar in sight as Thom Yorke and co. embraced the electronic ambience of Aphex Twin to produce a stark and surprising album. An album so revolutionary that I shamefully returned it to HMV because I thought it was shit. Turns out that as with almost every life decision I made around that time, I was very wrong.

Kid A changed music forever and some would argue that rock ‘n’ roll in the traditional sense has never recovered. Whether that is a good or a bad thing is debatable.

What They Said: ‘When you got beyond all the shit and the bollocks, the core of these songs were really good’ – Ed O’Brien

‘I like the people at our record company, but the time is at hand when you have to ask why anyone needs one. And, yes, it probably would give us some perverse pleasure to say ‘Fuck you’ to this decaying business model.’ – Thom Yorke

Not content with redefining rock music twice (!), Radiohead changed the way music would be marketed and released forever with 2007’s In Rainbows. As they had no record label at the time they released the album solely through their website employing a ‘pay what you like’ model that has since been replicated across the music industry.

More importantly though the songs are fucking brilliant. In Rainbows is the album that Hail to the Thief should have been. A perfect combination of guitar and electronica that combines everything that makes Radiohead great and at 10 perfect songs doesn’t outstay its welcome. The fact that the bonus disk is genuinely better than most bands actual albums speaks volumes.

What They Said:  ‘It’s incredibly annoying that no one’s noticed the giggles in that album. The song ‘The Bends’ is completely jokey, completely taking the piss. None of that stuff had ever happened to us when we wrote it’

Radiohead felt so pressured to follow the worldwide success of ‘Creep’ that they almost broke up before releasing The Bends in 1995. Thank fuck they didn’t. The Bends came out at the peak of Britpop but Radiohead have never been lumped in when the rest of the British bands from that era, namely because there sound is just too sophisticated, too unique.

Every song on The Bends is a classic, and while the album is not as cohesive as OK Computer, it is about as good as a straight forward rock album is possible to be. Just reading the track listing is enough to give me goosebumps. DON’T LEAVE ME HIIIIIIIIIIIIIIIGGGGGGGGGGGHHHHHHHH!

What They Said: ‘”We weren’t listening to guitar bands, we were thoroughly ashamed of being a guitar band. So we bought loads of keyboards and learned how to use them, and when we got bored we went back to guitars.” – Thom Yorke

I have spent far too long ruminating on the difference between ‘favourite’ and ‘best’. Whilst Weezer’s Blue Album will always be my favourite album, I believe OK Computer to be the greatest album ever recorded. OK Computer changed guitar music forever and made Radiohead one of the biggest bands in the world. Proof that you don’t need to compromise your beliefs to achieve success.

From the snarling car crash of ‘Airbag’ through to the dreamlike ‘The Tourist’, OK Computer is infallible and incendiary. It is also one of the last great albums, as in a collection of songs that need to be played together to understood. In the digital age the art of the album has almost been lost but OK Computer is one of the best examples of a cohesive, perfect whole.

Like Pulp, Radiohead are a band that steadfastly refuse to bow to anti intellectualism and it is this reluctance to patronise their audience that has ensured their longevity. Radiohead are a beautiful but difficult band and that is why we love them. The next time someone says  ‘Radiohead make me want to slit my wrists’, silently will them to do so as this will surely make the world a better place.