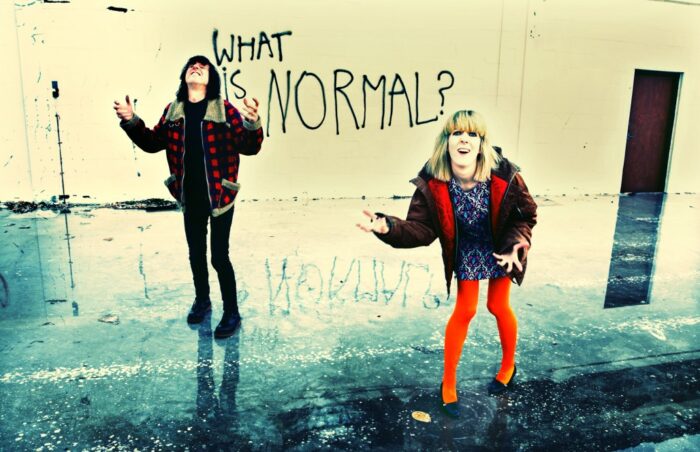 I’m not always sure that the advent of streaming has been a good thing for music but occasionally it does offer up some pleasing scenarios. A few weeks ago, a friend of mine played me a song by lo-fi Lancaster punk rockers The Lovely Eggs on a journey home from the worlds weirdest stag do. A few days after that I mentioned the band in an article I wrote and a few days after that I was invited to go and watch the band at the Picture House Social in the heart of Sheffield. It’s a funny old world…

Following an enjoyable performance from support act Mr. Ben & the Bens, married couple Holly Ross and David Blackwell took to the stage and immediately made a load of triumphant racket. ‘Hello I Am Your Sun’ is a glorious piece of psychedelic punk madness, ‘Wiggy Giggy’ is one of 2018’s most joyous singles and ‘I Shouldn’t Have Said That’ captures the essence of the band perfectly.

The Lovely Eggs are not afraid to be weird and crucially that eccentricity never seems forced. Their easy way with the audience and with each other is also testament to that. There are no affectations here, nothing to prove, just two people who know the music they want to play and the people they want to play it to. ‘Return of Witchcraft’ and ‘I’m With You’ ensures that their latest record This is Eggland is well represented, but it is perhaps ‘Fuck It’ that receives the best reaction with numerous scarves held aloft in the audience proudly bearing the name of that sweary song title.

Both band members constantly thank the audience and the support band, they are fellow Lancastrians after all, and it is clear that even after more than a decade there is nowhere The Lovely Eggs would rather be on a Friday night than in an old, crumbling theatre in South Yorkshire. That goes for the audience too.

The Lovely Eggs will no doubt be rocking up to a venue near you in the not too distant future. Don’t miss them.